I once attended a grand opening of a Counseling Retreat Centre in England. Strangely one of the people who had been invited to talk was a local self made millionaire. He was an “ordinary” bloke that had started his working life with a modest market stall. He was so good at selling things and over the years his empire grew steadily. He worked his way up to running what is now a formidable import business supplying the biggest stores in the UK.

He came up to the microphone looking very normal indeed and made a few light hearted forgettable jokes. He then said he would like to give the only piece of advice he knew that was worth passing on. He explained that he had never been any good at school, had no qualifications, had never read a book and didn’t really know much about the world. We were all waiting to hear what he was going to say. To a hushed audience he simply said “don’t do anything you don’t want to”. And that was it!

After an awkward silence some people spontaneously fired some questions at him . He was provoked into saying just a bit more “stick to what you know and what keeps you happy and keep doing it”. Certainly easier said than done, but in his case it evidently worked a treat. 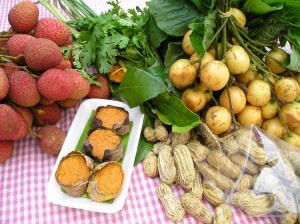 I have been reminded of this simple idea many times in counseling sessions and was reminded of it again this week when queuing up in my local market. My local market is the best market in the world. It sells some of the best things I have ever eaten anywhere (and I’ve eaten alot of things everywhere). One of the best things it sells is a type of Northern Thai sausage called “Say Oowa”. If you have been unlucky enough to never have tried this delicacy it”s a meaty pork sausage flavoured with lemon grass, garlic and chilli. Although it is sold throughout the market on different grill stalls everybody goes to the same one for their sausage.The stall doesn’t sell anything else except their own brand of sausage.

People come from all over the city to this one stall to buy it and its popularity seems to be growing. They have recently invested in some little labels to put on the side of their plastic bags with a logo and telephone number. Our good friend Son told me last week that they have secured a business license for their particular recipe which means that they can’t be copied (apparently). The owner of the stall is a happy man, he doesn’t need counseling. Confident, and a master of what he knows; sausage.

When I was queuing up I had a vision of him several years from now, looking “normal”, walking up to a microphone at a ribbon cutting ceremony, making a few light hearted forgettable jokes, explaining he hadn’t had much of an education and saying he would only like to pass on one thing.

I wonder if he will.

Bye for now. Talk next week about life change, counselling and living in Thailand.

For more information about our Counseling Retreat please do just send an email. We’ll get back in 24 hrs.