There’s a fat bloke down the market who’s job it is to deliver bar girls to different locations around the south of Chiang Mai. What makes this all the more unusual is that he ferries these young women around on the back of a dirty old motorbike. It really is a wreck, covered in rust, blowing out thick black smoke and making a noise like a sack of old saucepans falling down a well.

The whole image is a remarkable sight; the beautiful young women in skin tight micro dresses, a big fat sweaty bloke in a greasy anorak  with a cigarette stuck to his bottom lip and an old smokey motorbike. None of it fits together. They are like stills from 3 separate films, one called Hot Bangkok Nightclub Girls, another called The Man Who Let Himself Go and the third, an archive documentary film made by the Honda Classic Motorbike Appreciation Society. It would be an extremely useful series of photos to have when explaining the word juxtaposition to an ESL class. All together they look like a rather desperate side show act from an adult circus (if there is such a thing).

I saw them the other evening, the fat bloke and 2 bar girls on the old bike rattling and wheezing along the Canal Road. The women were of course amazingly made up with huge black false eye lashes, big black contact lens eyes, bright red lip stick and other potions and powders too subtle and complex for plain men like me to understand or describe. I wondered where they were going, so I followed them. 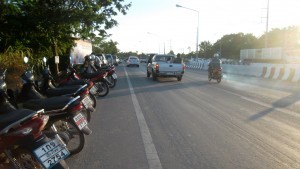 Admittedly this was an odd thing to do, but as they were in front of me on the road and heading in the same direction I had little choice. I did consider stopping at the side of the road and letting them disappear ahead of me but this felt even weirder as they have never actually noticed me (as far as I know, they may of course this very minute be thundering out their own blog articles writing about some weird foreign counsellor guy who hangs around the market, but somehow think it unlikely).

One of the women was applying yet more make up from a little compact set and looking at herself in the tiny mirror, which, zooming along on the back of a motorbike is a skill I imagine is not easy to acquire. The other woman was fiddling with a phone, flicking a screen sideways and longways, checking facebook stuff I guess.

I kept a respectful distance until we both pulled up at the traffic lights. I was right behind them, close enough to reach out and snatch her compact set, which would have given us all a surprise. Instead I just sat there. The lights remained red for ages. The sun was still bloody hot.

We all sat there for some time and at the back of my mind a memory slowly, slowly began to get clearer, like a small island in a misty lake. The memory was of me in a class in primary school listening to the teacher tell a story. It was about a farmer who had to ferry a fox, a chicken and bag of grain across a river. Do you remember it? He could only take one thing across at a time and you had to work out what order to take them to avoid the fox eating the chicken or the chicken eating the grain.

We all sat in Mrs Haylock’s class, cross legged on the mat and tried to work it out, wrestling with advanced concepts of logic in out little unlogical nine year old brains.

I sat at the traffic lights and thought about this.

Like a bolt of lightening, in a moment of other worldly revelation I realised the fat bloke with the cigarette was the ferry man. I had unwittingly stepped inside a logical thinking riddle, and it’s not every day you do that. The battered old motorbike would surely be the trusty rowing boat. And then my mind went a bit blank…who were the beautiful yet vulnerable yet predatory women? Were they the fox or the grain or the chicken…and what’s more who on earth was I? Was I the fox!

I felt a bit giddy in the traffic and the heat and the fumes and noise. It made my ears ring. I thought of the last scene in the film Pulp Fiction, and wondered if I was the shepherd, but then remembered this was a different tale altogether. I felt hot and dizzy.

I pulled to the side of the road and turned my engine off. The lights changed to green and everything sped away. The fat bloke and women disappearing into the fumey distance.

I slowly went back over it in my mind; the bike was the rowing boat, the fat bloke was the ferryman, the women were both vulnerable and predatory at the same time and I was sitting at the side of the canal road staring in to the distance towards disappearing traffic.

Everything went silent. I looked across the mango orchards and watched a flock of white storks circling high in the sky towards the mountains. Daylight was quickly fading and soon the millions of twinkling fairy lights and thousands of dazzling bar girls would light up the dark Chiang Mai sky. The mango trees swayed slightly in the warm early evening breeze.

After Mrs Haylock explained the logical thinking puzzle to us she went on to explain that for every problem there must be a solution and that by definition if there is no solution there cannot be a problem, and I remember thinking this was rubbish, but sat there on the mat for a very long time thinking about it quietly and watching all the other children noisily disappear out of the classroom and into the distance.

Check out our Counselling Retreat…it’s not far from Canal Road.