There are numerous life changing things to do in Chiang Mai that are both unusual and unique, it’s a place where the harder you look the more incredible it becomes. Here’s a short run through of things you might consider if ever you want to come out for a Life Change Holiday.

Chiang Mai has the greatest density of Buddhist Temples anywhere on the planet. Over six hundred in total (apparently). The gentle calmness that comes with Buddhism permeates every aspect of life here. It perhaps goes some way to explaining why Chiang Mai is such a genuinely special place…that and the mango and sticky rice. 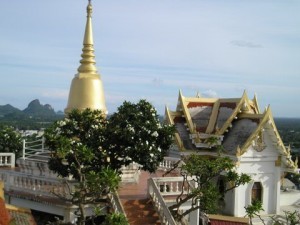 Every morning at about 6am the saffron robed bare footed monks make a quiet and graceful sweep of their neighbourhood, collecting food offerings in large ornamental bowls from anyone thoughtful enough to get up early and prepare (or buy) some food to put in the alms bowl.

Although against any form of violence to man or beast Buddhist monks are prepared to eat anything, so nothing is refused. If you are kind enough to donate it they are obliged to accept it.
Being part of the early morning alms round is a special thing. It’s not something you will ever forget, and certainly worth getting up that bit earlier to be part of.

Eat At A Food Court

I love food, and shopping for food and going to restaurants and all Chiang Mai people do too. It’s the secret unofficial food capital of SE Asia.

You may wonder what Chiang Mai, or Thailand come to that, has ever given the world of culinary greatness beyond stir fried noodles and sticky rice. I give to you the humble Food Court.
For those not familiar with this Thai institution a traditional food court is an area where numerous small food outlets are set up, each one specialising in just a handful of dishes. Customers usually purchase food tickets at the entrance which can then be exchanged for whatever food you fancy.

So what, I hear you say. Well, this is the what. Imagine that you cook the same few dishes over and over again, perhaps hundreds of times a day. You end up getting exceptionally good at it. Throw in the fierce competition of up to 40 or 50 small food outlets all vying for the same customers and you get a recipe for cut price culinary greatness. Some of the greatest meals I have ever had have come from a humble food court. They really are worth a visit, and can be found in any shopping centre.

Several of the big temples in the centre of town operate a wonderfully named “Monk Chat” service. It is what it sounds like. At designated times anyone can trundle along and have a chat with a Buddhist monk. Crazy I know. It’s a win win situation whereby monks get a chance to practice their English and talk about things from a Buddhist perspective, and you get to talk to a monk about anything that takes your fancy.

On the occasions I have done this we have talked about a wonderful range of things from football (“why you like Arsenal and not Manchester United” I was asked) to the purpose of death and everything in between.

On the whole the monks are very interested in you and where you live, what you do, what you buy, what you think about, where you went to school. It really is an interesting thing to do and I promise will leave you with much to think about. Highly recommended.

Have you ever seen grown ups experience snow for the first time. It’s like making everyone six years old again. Get yourself along to the Snow Dome where for a small sum of money you can enjoy the delights of watching groups of SE Asian tourists squeal with delight as they encounter snow for the first time in their lives. You can also go tobogganing and build a snowman. Woolly hats, gloves and ski clothes are supplied with the admission price.

I don’t care if you don’t like flowers, this will knock your socks off (as they say). The shear volume of flowers in the flower market in Chiang Mai is incredible. There are huge bundles of orchids everywhere, wrapped in newspapers and stacked high at the road side, not to mention roses, lilies, sunflowers, chrysanthemums, dragon head flowers, scented jasmine and a whole host that you have never seen before.

Go to the flower market. It’s a must for everyone who visits Chiang Mai.

Whether you’re here for a Life Coaching Holiday, Counselling Retreat or our Couples Therapy Retreat make sure you make the most of your stay in what must be the most incredible place on earth.