“Up tight, up tight, what the hell do you mean I’m UP TIGHT…I DON’T NEED TO LEARN TO LET GO”

I was in a counseling session and had made the fatal mistake of suggesting to Thomas, the most up tight person I had ever met ,that he was, well, up tight and needed to learn to let go. He was in my office and he was yelling his not inconsiderable red face off.

I wondered whether it would be the first time in 10 years of counseling that I might get punched. In retrospect I don’t think I was far away, although these days Thomas swears blind that he would have never hit me, but to be honest it was such a long time ago I don’t think he can really remember how wound up he used to get.

Thomas is now a pretty cool laid back dude, and this is how he learnt to let go:

Astonishingly up tight people don’t know how up tight they are. Why should they? None of us really know how we come across to other people.

When I was well into my thirties it took me by complete surprise when a counseling colleague said to me “bloody hell, you’ re so damn driven aren’t you.” I was astonished, I even argued back. Me driven! I was outraged. It was an insult to every un-driven drifter in the land.

I responded similarly to how Thomas responded, although not so up tight, of course. I was shocked, I had no idea.
The first big step is recognition. Unless I, or anyone else on the planet recognizes a problem why would we change? 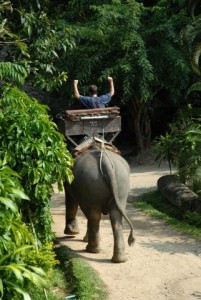 The Up Tight O Meter

I’ve invented a meter. It’s called the Up Tight O Meter. Basically it’s a bit of paper on which I have drawn a graph. It’s not very good but it does the job. The graph simply goes from 0 to 10. 10 representing the most up tight anyone could get ever, and 0 is completely relaxed. With this crude but simple gauge it’s possible to nail down exactly how up tight we might feel at any given time. I use it all the time, and you can too. It’s very accurate, as research demonstrates.

Despite being pants at recognizing what we are really like, and how we come across to others, we are all blessed with the gift of being able to accurately record to what degree we are experiencing emotions. This quirky little phenomena has been proved during countless boring research studies carried out by people even more driven than me. Ask anyone anything on a scale of ten and they will pinpoint exactly the number that correlates to them, whether it’s being up tight, angry, happy, sad or whatever.

The Up Tight Diary

The Up Tight Diary is another of my inventions. Again it’s pretty basic, well very basic actually, but like the Up Tight O Meter it does do the job. It’s actually a cheap note book from the 7 Eleven.

It’s important to begin to take control of being up tight and we can do that by recording how we are feeling (using the well known meter). It also helps trace an accurate picture of what’s going on, for example, if certain people or situations make us more wound up. When we can see what’s going on it’s easy to manipulate our environment to our advantage; cut down things that increase our up tightness and increase things that make us feel relaxed. Like all the best things, it ain’t rocket science, but it works.

To help you get motivated to start your diary this might help.

As well as the above strategies it’s also useful to remember some basic truths. It’s handy to have a list of statements that are useful to repeat when scoring over 5 on the Up Tight O Meter; things that just serve to put our up tight world back into perspective. Here are some popular statements that others have used that might do the trick for you:

However bad I feel right now my feelings will change.
In the greater scheme of things how important is this incident?
Life is too short to get so distressed.
I am in control of my feelings, they are not in control of me.

Of course there are also all kinds of relaxation techniques out there as well; there’s yoga, meditation classes, Tai Chi, heavy drinking (only joking)…but there are a hundred and one other things out there that if we so choose will help us to let go of being so up tight. If these ideas don’t work for you don’t suffer alone, find a good Counselor or Life Coach to help you….or have a look at our Life Changing Holidays. They will help.

Right now I’m scoring 2 on the Up Tight O Meter. What’s your score?