Is it me or is there something wonderfully romantic about forgotten waterways that meander unnoticed through our modern cities?
Chiang Mai is a beautiful city and has many waterways that add interest and intrigue to an already interesting and intriguing city. It’s also one of only a handful of cities in the world that is still fully surrounded on all sides with an impressive water filled moat which is inhabited by sluggish old catfish and the lively silver Tilapia.

Growing along the banks of the moat are ancient Flame Trees with bright red burning blossom and also the wonderful and giant Dipterocarp trees which reach well over a hundred feet above the city. They are the giants of the tropical tree world. On hot summer days children climb out along the big old branches that overhang the water and jump into the water below, often to the shock of passing motorists.

In an act of unprecedented local authority generosity, almost unheard of in these days of financial cutbacks, there is an elaborate system of ornamental fountains that shoot water from the moats high into the air. Because of this I would like to award top marks to the Bureau of Fountain Development, of which, I am sure, there is a bustling department office somewhere in the city, staffed by serious looking men in immaculate military style uniforms and young women in tiny skirts who operate the obligatory ancient photocopier.

In fact Chiang Mai owes its very existence to water in the shape of the steady old River Ping, which in days gone by allowed passage and trade to China, Burma, and the rest of the world. After giving birth to the city, the same river dramatically flooded and destroyed it, prompting a hasty relocation 700 years ago to the present safer, drier site. (You can still visit “the lost” city of Chiang Mai which is a short bus ride from the city centre).

Alongside the mighty Ping, flows (or stagnates would be more accurate) the humble and forgotten Klong Mae Kha, romantically named after the Ginger Lily (known to cooks as Galangal) that must have once grown wild along its shady banks, or perhaps cultivated in river side vegetable gardens, lovingly tended by gardeners who felt blessed for being able to live next to such a wondrous natural resource. Whimsically I like to imagine both.

Unfortunately, nowadays, the Ginger Lilies have all gone, having been replaced by debris from modern day living; old rusting coke cans, plastic bags, empty instant noodle pots and discarded energy drink bottles rub shoulders with the invasive and choking Water Hyacinth.
The Mae Kha was though, at one time, a river of great importance which played a vital role in Chiang Mai’s history and even its modern day survival.
Cast your minds back, if you will some 500 years. The wild ginger lilies nodded peacefully alongside the clear, bubbling waters of our little river, women washed clothes, men tended vegetable gardens and children from the neighbouring villages caught little fresh water fish (see what I mean about whimsical).

The Burmese had been quietly eyeing up Chiang Mai from over the mountains, realising it would make an excellent stronghold to launch attacks further south into Siam and Ayutthaya (the old capital city of Siam). For over 200 years from 1558 to 1774 Burma held control during a time of constant struggle and upheaval and the use of our little river as part of a city defense system was not lost on such battle sharp people. So, work began upon an incredibly ambitious and elaborate undertaking which basically turned our small pretty little river into an impressive fortified secondary outer moat. Local streams were diverted and dammed, and huge earthen ramparts were built, effectively sealing off the city from attack from the south. At the bottom of these ramparts flowed our once sleepy little river. 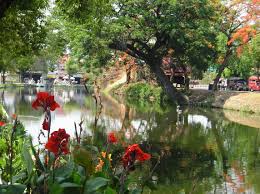 This engineering project would be incredibly complex by today’s standards, let alone nearly 500 years ago. It must have taken thousands of workers years to build, using nothing more than buckets and spades, often in unbelievable heat. It would certainly have sent the Bureau of Fountain Development into overdrive, the photocopying alone would have gone on for months.

So what happened to all of this incredible building work and engineering; the outer defensive moat and huge earthen ramparts?
Well, not a lot really. When Chao Kawila bounded heroically into Chiang Mai at the end of the 1700s, reclaiming (and as it says in the history books “re-populating”) the city once again for the Thai people the old outer ramparts and our little river were forgotten about and largely ignored. Well, to be more accurate, completely forgotten about and totally ignored.

Incredibly, it is all still here just as the now immortalised Chao Kawila left it nearly 200 years ago, albeit somewhat abused and forgotten. As the city grew the ramparts where consumed within back gardens and housing developments and our defensive outer moat was used for waste disposal. Drains were conveniently funnelled into it, not helped by the fact that water flow in some parts of it are almost non existent.

If you have time from your Life Coaching Holiday or Couples Therapy Retreat, it makes for a fascinating walk to follow the old moat and crumbling fortifications from its south west corner, behind the San Prung Hospital right the way to its conclusion near the north eastern corner of the old city.
Starting from the hospital at the south west corner of the moat road walk along the Mahidol Road and turn immediately left into what looks like a sunken and somewhat neglected public park, which is in fact actually a sunken and neglected public park.

You will be walking along an odd little footpath with a massive earthen rampart towering 30 feet above you on your left and what is left of the defensive moat trickling along on your right. The whole park is actually built on the old course of what was actually the massive moat, hence the strange sunken aspect. It still floods during the wet season.

If you feel energetic you can scramble up the sides of the ramparts, like the brave Chao Kawila some 200 years ago and re-live the storming of Chiang Mai and overthrow of the occupying Burmese. 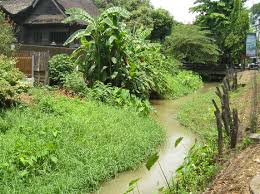 Nowadays though, instead of being greeted by some murderous soldiers you will find yourself in the back yard of the many Thai houses that have been built into the other side of the earth work. The occupants will probably look at you in a very curious way wondering why you have appeared out of nowhere in their back yard, especially, if by way of explanation you attempt to describe the historical significance of their back yard and make the mistake of going on to mention Burmese soldiers and Chao Kawila. It made sense to me at the time, and I was a bit out of breath.

Scramble back down to the park where you will shortly come to an abrupt end and find yourself back out on the noisy, modern Mahidol Road. Carry on down, past the car showrooms and shops and note the still impressive defensive tower, the Thipanet Bastion on your left. It is by far the most well preserved piece of the fortifications and quite wonderfully still has people living in it; a fantastic legacy of the skill of the Burmese builders.
Turn left along Hai Ya Road where you can buy a wonderful selection of tropical fish for your aquarium in the pet shops. The little river is still running behind the shops, but most of the ramparts have disappeared. You can then cross the main road that takes traffic straight into the city over the humped back bridge with our little brave river below. Walk past the guys that will be playing Tak Kraw (Thai football tennis) and follow the river right past Wat Nantaram, known for it’s local herbal medicine, and right the way up to the notorious Kamphaengdin Road with all it’s tawdry bars, towards it’s source in the far North Eastern corner of the city.

Interestingly the literal translation of Kamphaengdin is “Earth Wall.” In fact if you walk out from the Imperial Mae Ping Hotel which is on this road, almost the first thing you will see is a big odd mound of earth outside a shop. It looks like it could have recently been dumped there by a pick up truck and has somehow become petrified. It is in fact part of the remains of Burma’s finest defense system. The river still runs (rather stagnates) just behind the bars and shops which use it as a convenient waste disposal system.

I can’t help feeling that it is a shame to be losing, so rapidly, such an important historical monument and such an important part of Chiang Mai’s cultural and historical heritage. You might think that it would even be worthy of a modest visitor centre, a small museum or at least a few information notice boards. Surely not everybody that comes to Chiang Mai simply wants to ride an elephant, attend a Kantoke Dinner or drift down a river on a raft. For the time being though we’ll have to make do with an ornamental archway into a bar and a neglected sunken park.

So if you are on your way to the Night Bazaar and pass over the “Ginger Lily Canal” spare a thought to it’s illustrious past as a 450 year old, state of the art, city defense system. But, also if you’re like me, think further back to a time when it flowed by well tended vegetable gardens where young children played and caught fish in the bubbling cool waters and pretty little Ginger Lilies grew wild on the river banks.

Hope you enjoy this Life Change Blog, please pass around to friends.

This article was originally published here, where you can read other interesting articles about Chiang Mai